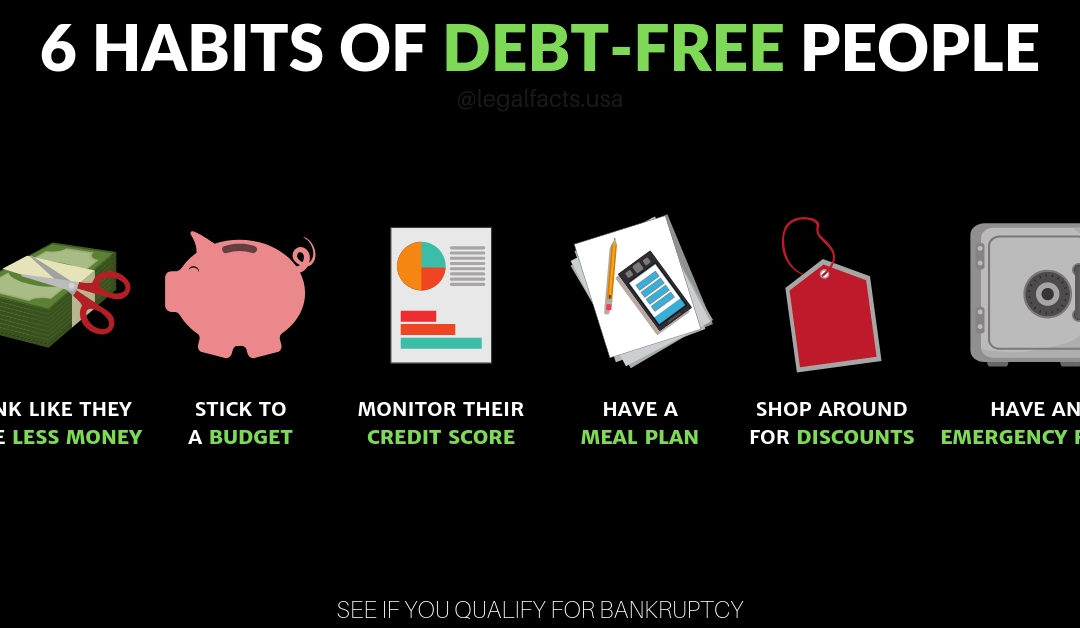 While many of us worry over our debts and other financial problems, some people seem to be lucky to be “worry-free” from financial problems – and debt! We think that they’re just lucky or super rich that they don’t have to worry about their next penny. These are faulty mindsets, however; these are much like myths that needed to be dispelled as quickly as possible.

So, what are these habits? Let’s look closely at the habits of debt-free people.

When you think you only have less money, you’re more likely to save than to spend. And yes, that’s regardless of how much money you make, big or small.

If that doesn’t make sense, let’s think of the opposite: thinking you have more money.

When you think you have more money – again, regardless of actual income – you tend to spend more than save. And once you reach your budget’s peak, you begin spending money that you didn’t earned – yes, debts!

The funny thing is, we rationalize taking debts by saying, “Oh, I can pay this next month. There’s more money to come, anyway.” This, again, is thinking you have more money.

So, think like you have less money. This may sound gloomy at first, but it’s all about proper mindset and financial discipline.

When you think you have less money, you begin to prioritize your spending well. You realize that not all “Sale” are worth buying for – why do you buy a pair of spoon and fork just because it screams, “80% OFF!”?

2) They stick to a budget

It’s one thing to make a budget, it’s another thing to stick to it. Once you laid out your budget plan for a certain time frame, stick to it.

This all boils, again, to discipline. Debt-free people are simply more disciplined in their finances. They stick well to their budget plan (and adjust it if it doesn’t work out well).

Make your own budget plan, then stick to it. If it doesn’t work, adjust it until it finally works.

3) They monitor their credit score

Most people monitor their credit score just to see if they can afford an auto loan for that beautiful newly-released car model. Debt-free people don’t think the same way.

To them, their credit score is just one way to gauge how much they perform financially.

Monitoring your credit score also helps you to gauge your fallback capacity. Should you really fall down financially, you’ll know how much debt you can take to recover.

4) They have a meal plan

This may sound very meticulous, but debt-free people budget even their meals. This helps them in two ways:

This doesn’t mean they don’t enjoy their meal, but they just choose wisely for each meal. For instance, for lunch, they just buy steak or fish. But they don’t put all in their plate – steak, fish, ice-cream and soda! Not only that’s physically unhealthy, it’s also unhealthy financially.

5) They shop around for discounts

Debt-free people are experts at bargain and discounts. This may sound cheap, but even some very rich people shop for bargain.

They don’t do this to buy the cheapest of everything – they’re willing to spend a lot on a quality item – but some items can be purchased at a discount without sacrificing quality. This is often the case for grocery shopping.

For instance, why buy a separate pasta and tomato sauce when you can buy them in a pack?

As long as quality isn’t sacrificed, there’s nothing wrong for hunting those discounts.

6) They have an emergency fund

Debt-free people understand that taking debts during an emergency isn’t really the best option under such circumstance.

They know that having an emergency fund is their best first offense because this gives them time to recover. If they took debt sooner, this can lead them to a downward spiral – especially if they are under a financial emergency.

For most of us, on the other hand, we run to family, friends or the bank should an emergency rise – all because we don’t have an emergency fund. This isn’t good because, while it saves us from the current emergency, this pits us to another hole – the debt itself.

This isn’t to say that taking debts under these circumstances is bad, but if you have an emergency fund, you have a cushion to rely on and give you more space to recover. In this case, debt is actually an unnecessary remedy – one that should be used as a last resort than your first offense.

Debt-free people are not debt-free because of luck or wealth. Rather, they are in that financially coveted position because of their habits.

Of course, debt-free people aren’t literally “debt-free”. They do take debts when it’s wise to do so, or if pushed to the very bottom – like if their emergency fund is depleted and they’re still under trouble.

But unlike most of us, they don’t take debt as part of their lifestyle – they avoid it at all costs!

If you want to be debt-free, take these habits with you to live a debt-free and financially-stable life! If you find yourself always in debt, it’s also because your habits lead you down there!

If you’re on a verge or in the middle of a bankruptcy case, however, be sure to have an expert bankruptcy lawyer with you to help you in your case!